After a busy, but fun-filled weekend in Playa Del Carmen, I decided that I wasn’t in the mood to figure out all the details of how to get to the Coba Ruins, so instead we just booked a tour that would take us to Coba and two other locations, picking us up right at our hotel door.  This was a welcomed change.

The first stop on our tour was actually what I expected to be the last stop, which was a cenote tour.  Cenotes are located all over the Yucatan peninsula, and are basically sinkholes.  They are deep in caves, or even out in the open.  We learned that the Mayans purposely built their cities on and around cenotes so that they would have a water source, which makes perfect sense.  The water often has a greenish tint, due to the limestone.  So, these “sinkholes” have been here for thousands and thousands of years. 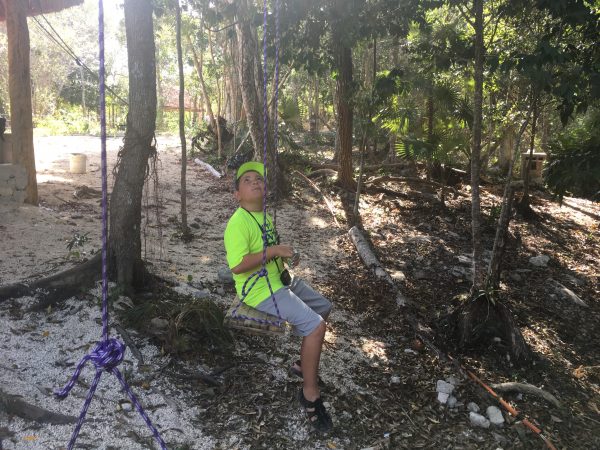 This particular set of 5 or 6 cenotes that we visited were located in Tulum.  As we arrived, we found a restaurant, shop, bathrooms, and a lovely shaded area with hammocks and swings for resting.  Our tour guide walked us down some steep steps into a small cave to show us a few very small cenotes.  The surprising part of this tiny cenote is that it is actually hundreds of feet deep! 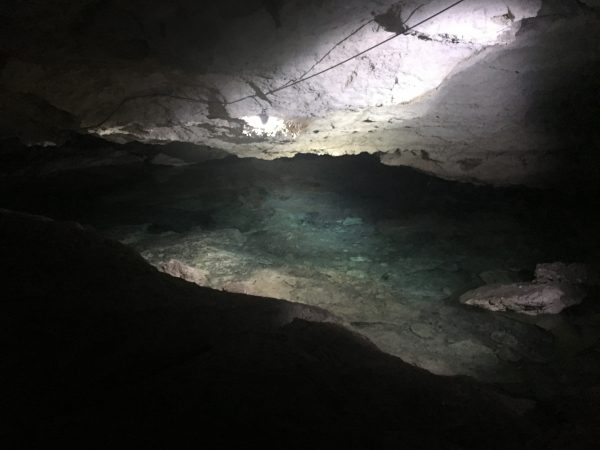 The cenote pictured below is called Cenote Tortuga.  This one is well equipped for visitors, as you can see.  There is a zip line so that you can run, zip along the line, and jump when you get to the middle of the water. 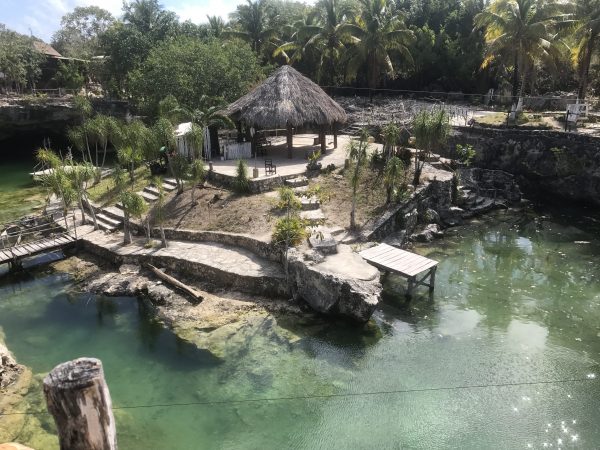 We then took about a 20 minute walk through the warm, humid jungle to visit a few more cenotes.  As we walked down into another “cave” cenote, a bat flew out.  Several people on the tour took a dip into that cenote, despite the bats.

The last and final cenote was presented by the tour guide as our very special treat, and it was a treat!  It is called Cabode Cenote.  Just look at the color of that water!  It was so pretty.  This one was shaped like a large horseshoe, and it was very skinny most of the way around until we got to the end. 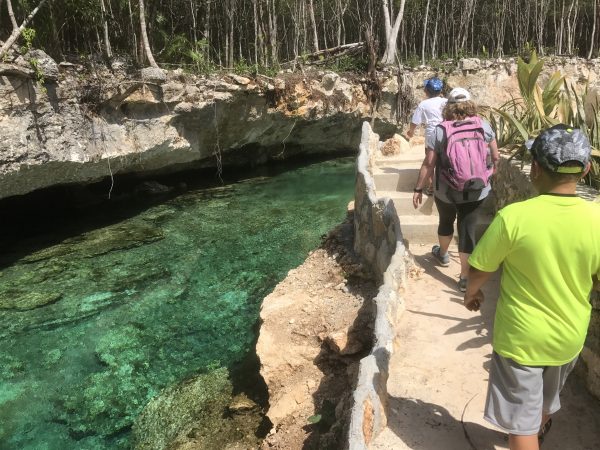 This part was perfect for swimming.  There were stairs set up alongside it, and also great jumping and diving off points for the braver people in the group. 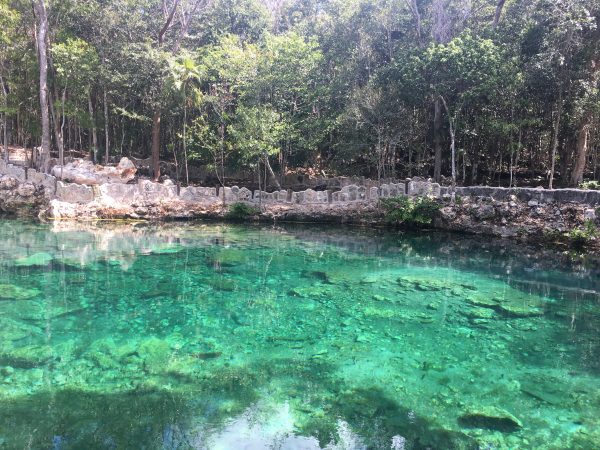 At first the kids had no desire to go in, as the long walk in the heat had really gotten to us all.  But, one by one, my family succumbed to the beautiful water, and even I, (fully dressed with no intention of entering) could not resist.  I got in that water, and man, did that feel good!  It ended up being one of the highlights of our trip.  No worry about my wet clothes anyway.  It was so humid that I was dry in no time at all! 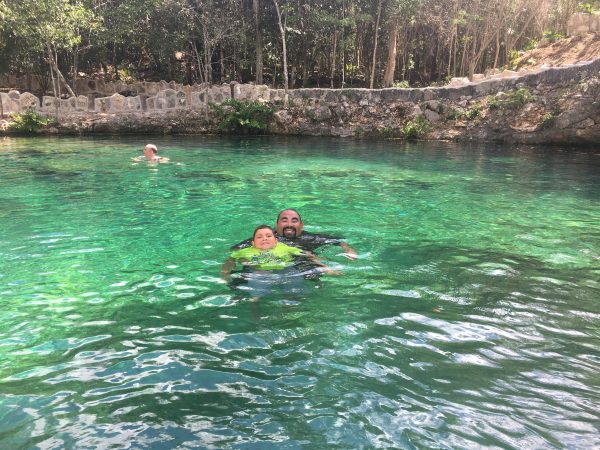 Our next stop was for a buffet lunch in the city of Coba.  We were the first van there, and before we knew it, the entire place was crawling with tour groups.  They had a very nice spread of food, something for everyone, and we had a view of this lake across the street.  Once we heard that there are actually crocodiles in this lake, we kept our distance.  I had my eyes peeled, but unfortunately didn’t see any! 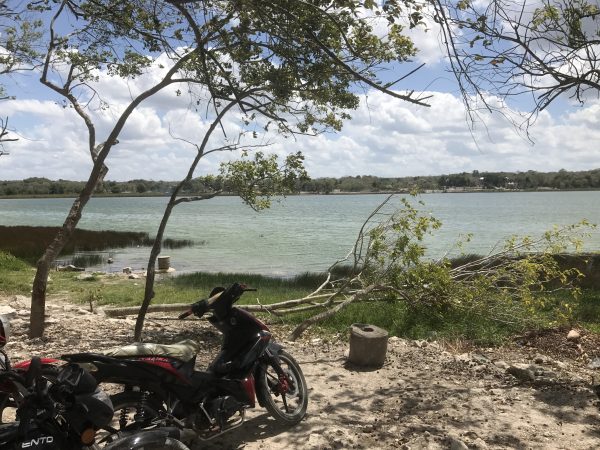 Next we made our way to Coba, and the guide led us in and began telling us about the Ruins. 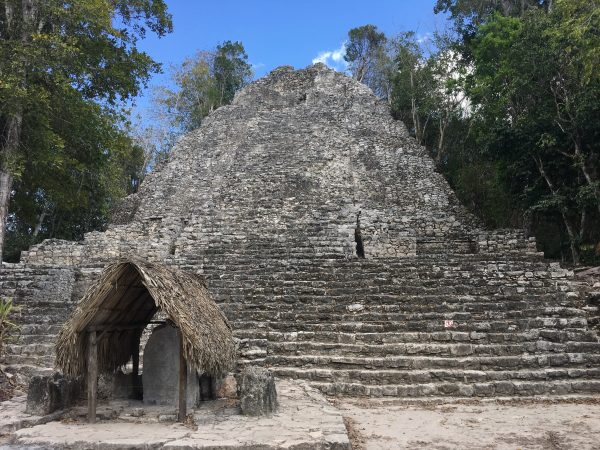 Pictured below is one of the ball courts for a game the Mayans used to play where they could only use their body to get the ball through these hoops.  At the end of the game, somebody was granted the honor of being “offered” or “sacrificed”.  The story was told both ways, either the winner or loser was offered, so there seems to be some confusion as to which it was.  Not a game I’d care to participate in. 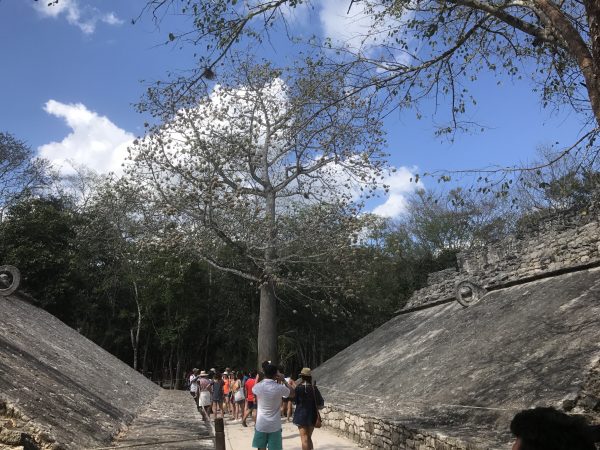 They also gave us the option of renting bikes or riding in a rickshaw to the largest pyramid, so we opted for bikes.  This was on my bucket list and I wanted to make sure we had time to climb the pyramid. 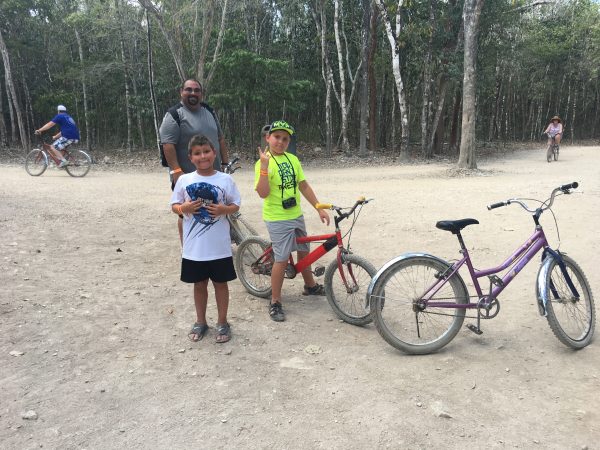 We paid for bikes and were told to just pick any bike that fit us.  We biked the rocky trail, dodging rickshaws, and crowds of people.  There were lots of people climbing the pyramid when we arrived. 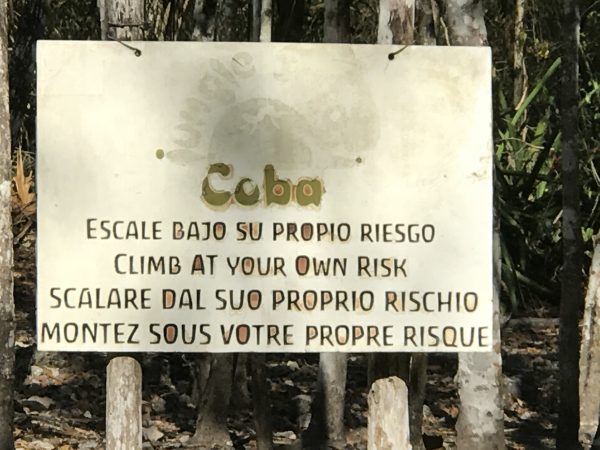 Up the center of the pyramid was a rope, and without giving it too much thought at first, I assumed the rope was there to help people climb up the pyramid.  It wasn’t until looking closer that I realized people were holding onto the rope to get down because the stairs were steep, and slippery, due to all of the foot traffic. 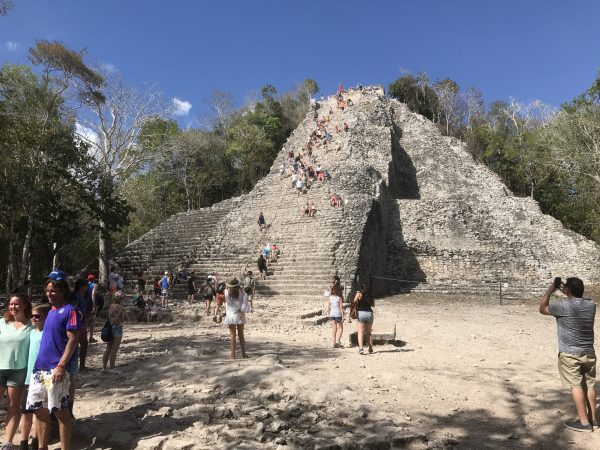 The boys and I made our way to the pyramid, and after climbing only a few steps, the realization hit me of just how sharp of an angle that pyramid rose.  I swayed slightly upon this realization, and at that moment my uncertainty set in.  I had both boys with me, and I knew that if I was going to get to the top of that pyramid, I was going to go up quickly and I was going to use both my hands and my feet in order to keep my balance.  So, except for one stop mid way up to sit down and enjoy the view, which already put us up over the tree line, I booked it up that pyramid.  I decided I would only worry about getting back down once I was at the top.  Haha.  Smart idea, crazy idea, or maybe a little of both.

There were so many people on the small little area at the top of the pyramid, that I was quite nervous, especially with two young boys that I feared would get too close to the edge, or someone would bump into them, and make them fall.  You know, mother worries.  They were totally fine, all the fears were in my mind, yet I still struggled to really enjoy the view from the top.  I took a few quick, unsteady pictures and videos, and that was all I could spare to take my eyes off the boys.  The pyramid is 137 feet tall and has 130 steps.

I realized that Kyle would want to take off down the pyramid, so I forced him and Jacob to stay right behind me in case they fell.  To my great relief, there was a whole line of people in front of us that decided the best way down was to scoot down on their bottoms, one hand on the rope.  When I saw the shine on the steps coming down, I knew this was the right decision.  We would have sore bums the next day, but I didn’t care.  It was better than to risk slipping and falling down the steep stairs.  We scooted down one step at a time, until the last several steps where I let Kyle beat me to the bottom. 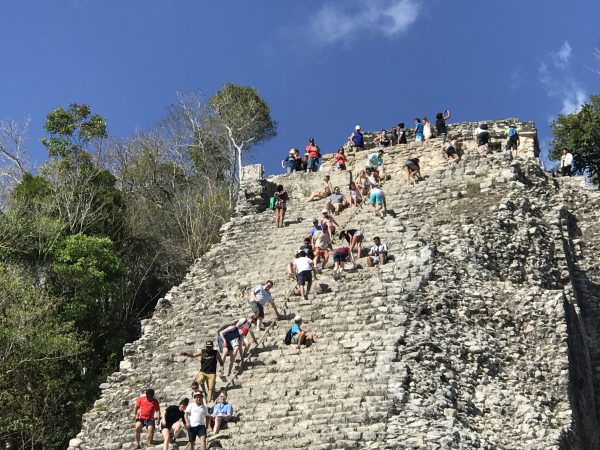 As scary as this was, it was also a great experience to share with my boys, and I knew they would always remember it!  Our final stop was a tiny little Mayan Village, and then back to the hotel, where we collapsed with exhaustion.