Connecting with Family & Friends in Merida 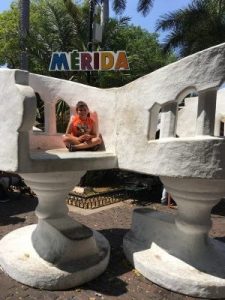 Spending time in the capital city of the Yucatan, Merida, was not even on our radar, until our traveling friends brought our attention to a Worldschooling Gathering taking place there in April.  We were very excited about the opportunity to spend time with our friends and to meet and connect with other families that are traveling around the globe.

We were fortunate to have Rick’s parents traveling with us through Mexico, and then his brother and his girlfriend joined us for a few days in Merida as well!  So for the few days leading up to the Project World School Family Summit, we spent time with family, exploring the beautiful city of Merida. 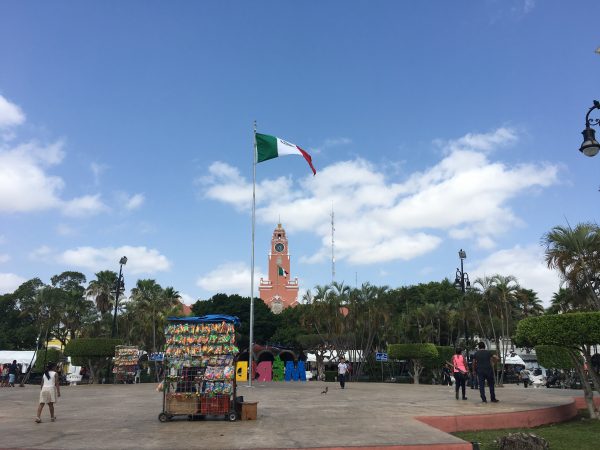 We stayed at the Hotel Los Aluxes, which was close to the city center, as well as the Paseo de Montejo, a street lined with beautiful, old Mansions, so walking was fairly easy.  Although with temperatures hovering around 103, no walking actually seemed that easy or enjoyable!  Next time, I’d probably choose an airbnb in this approximate location and skip the hotel altogether. 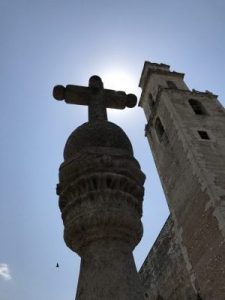 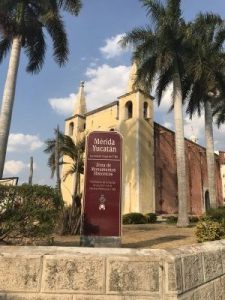 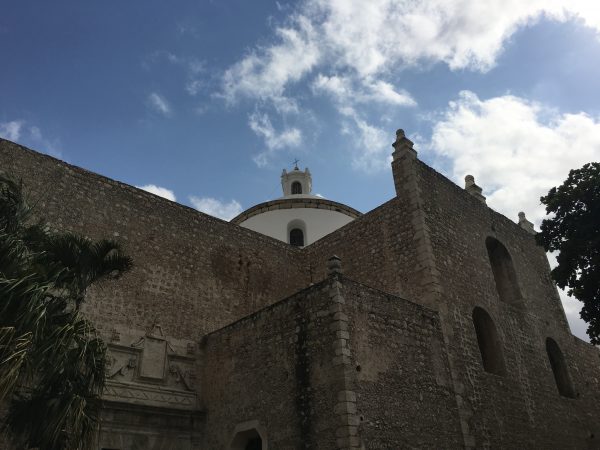 We spent our first full day in the city walking to the Plaza Grande, the central plaza, with its Cathedral de San Idelfonso.  There were some nuns selling some baked goods, so we indulged while people watching for awhile.  My husband’s family took a horse and carriage around the plaza, which also took them down the Paseo de Montejo. 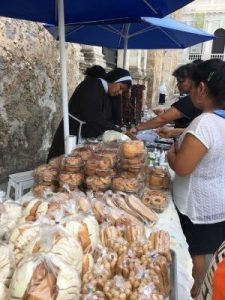 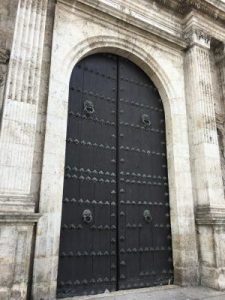 Every Sunday the main road through the Plaza is closed, and many of the locals rent bicycles to ride around town. 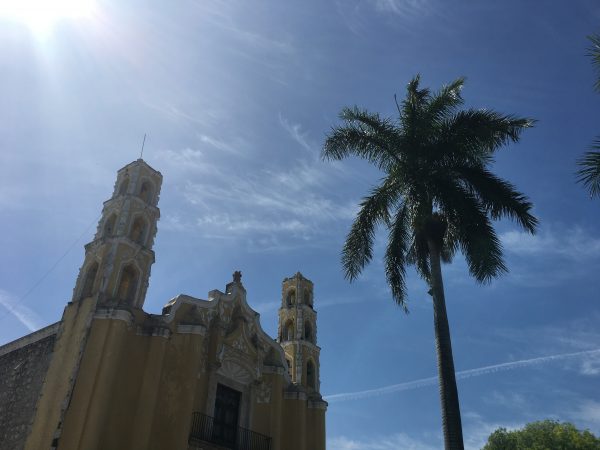 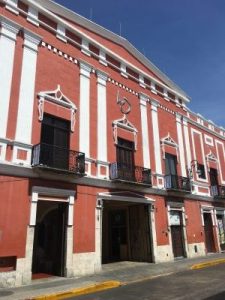 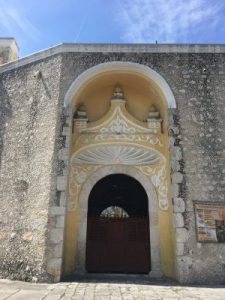 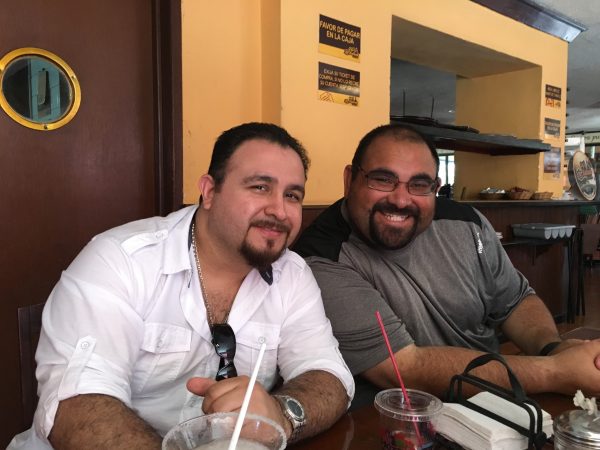 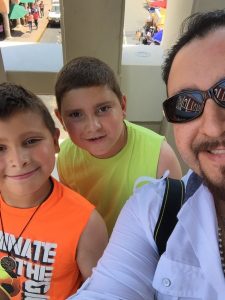 We enjoyed the pretty architecture of buildings throughout Merida, but mostly we just had fun being together with family! 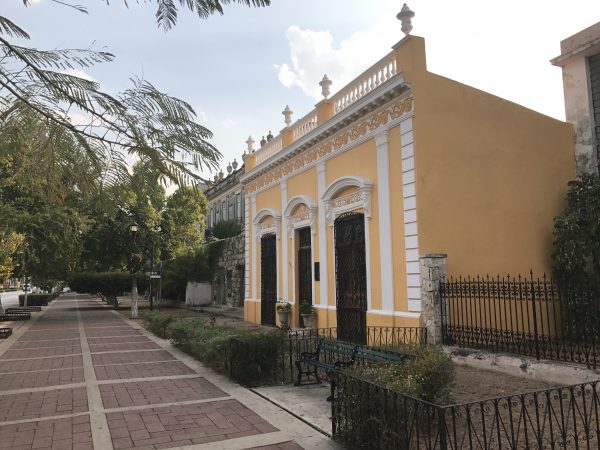 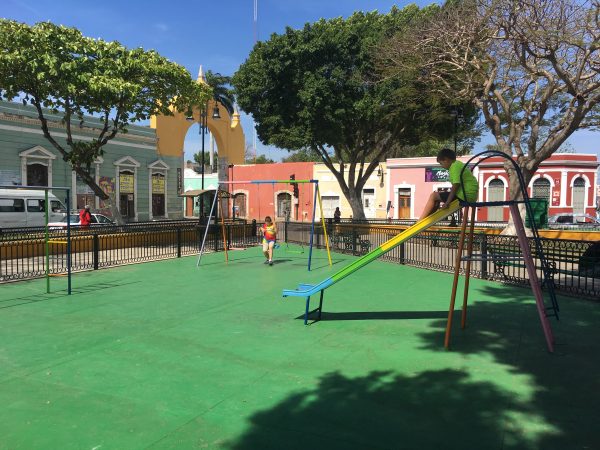 The Summit was a lot of fun, as well as extremely exhausting.  We had such a great time meeting other traveling families and being inspired by their stories.  After the Summit ended, we moved across town to an apartment rental.  There we were close by to our friend’s rental house as well.  We were near to a busy street, but the upside was that there was a grocery store, laundromat, and pharmacy all directly across the street.  I especially liked waking up to a rooster crowing somewhere nearby!  On our corner was an awesome little food stand that served delicious tortas at lunchtime for about $1 each.  The cost of living in Merida was very appealing to us. 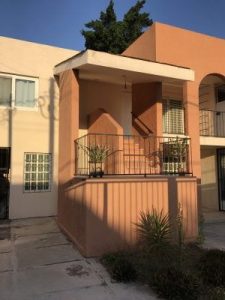 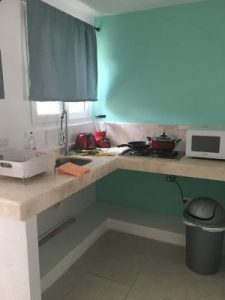 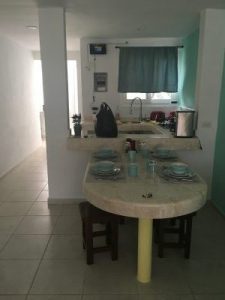 Our apartment was very cute, located on the second floor, and had pretty much everything we needed to have home cooked meals.  The only drawback to cooking was the heat it produced!  There were only air conditioners in the bedrooms, which is pretty common there.


We chose to use Uber to get around, which is newer to the area, because it was extremely easy to be picked up in front of our apartment and dropped off anywhere around the city.  It was really inexpensive.  We used the opportunity to talk to the locals and get to know how they liked living in Merida, all while practicing Spanish.

There were several nice shopping malls in the area, and we took advantage a few times to get out and get some relief from the heat.  One mall had an indoor trampoline park, which we tried out with our friends.  As you can see below, it was pretty exhausting. 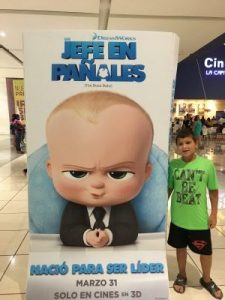 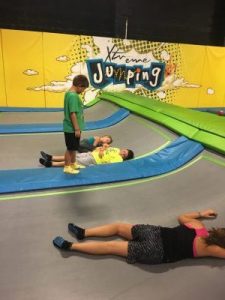 We spent a lovely evening at this outdoor eating area, surrounded by food trucks.  We had a very tasty meal for very little money, and everyone found something to eat that made them happy.  This picture conjures up great memories and was a nice ending to our time with our friends in Merida! 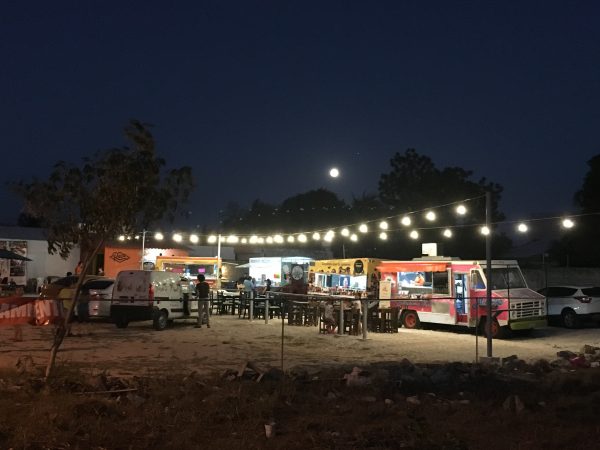 Sadly, our friends had to leave Merida early.  We ended up staying indoors the entire week after they left, because both boys got sick.  After a visit to the local doctor’s office and some medicine, things started looking up, and the doctor assured us that the drastic change in environment (and temperature) commonly makes travelers sick.  We had hoped to use our last full weekend in Merida to see Chichen Itza, but we still didn’t think the boys were quite up to a long day trip in the extreme heat, and we just wanted them to feel better, so we skipped it.  That’s okay, just another reason to return to the Yucatan!

Have you ever visited Merida or the Yucatan?  What was your favorite part of the trip?

Ek’ Balam
The End of Our Mexico Adventure: Cancun
Subscribe Below and Receive My Favorite Inspirational Quotes.