After a week in Ireland, it was time to head to Northern Wales.  We opted to ride the Ferry from Dublin to Holyhead Wales, a two hour journey, because, well, I like variety!  We were loaded onto a bus and shuttled to the ferry about a half an hour ahead of our departure time.  It was interesting to see people driving their cars onto the bottom level of the boat.  There was plenty of seating space on the ferry, and a full breakfast was available.  We settled into a large, comfortable table, and the boys played with toys.

Unfortunately, one hour into our trip, we hit an “unexpected” swell, and the boat swayed violently back and forth.  A poor man was even trying to carry a tray from the breakfast bar to his table, and went flying back and forth across the aisle, trying to balance his food, and grabbing onto poles and chairs on as he was thrown from side to side.  It was like a comedy and a nightmare all at once.  We were all sea sick and nauseous, all except for my 9 year old, who had eaten a full breakfast on the ferry, ironically, and sat and played, oblivious to the commotion surrounding him.

The Irish Seas are apparently known for being quite rough at times and canceling these ferries is quite common, but in this case, they just didn’t know it was coming.  I was extremely happy to hit land, and bummed that this happened, because it seemed that this would ordinarily be a very nice little boat ride.  Alas, we arrived safely, and that’s all that mattered.

Upon arrival at the train station, I had a little trouble communicating with the train clerk.  Our destination was Llandudno, which as an American, I assumed sounded something like “Lan-dood-no.”  Ha ha.  Apparently I was waaaaay off.  I finally had to show her the written word, which she then rattled off in a foreign tongue that sounded nothing like the word I had read.  (For reference, it’s more like “Tlon-dud-no”, which is supposed to roll off your tongue softly, not in a harsh Midwestern American accent like mine.  Words that begin with double L are common in Wales, they make a /tl/ sound.  )  I later asked another native on the train how to say it, and I had to chuckle to myself, because I still hadn’t a clue how to say it! 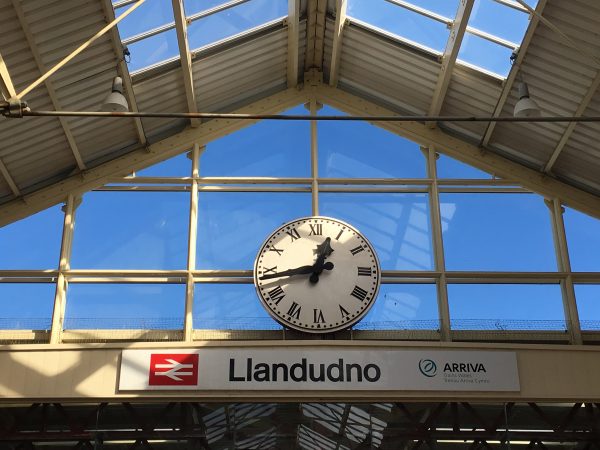 As we went through security, the guard narrowed his eyes and asked where we were headed.  I smiled, shrugged my shoulders, and said, “something that starts with an “LL”.  Luckily for me, he laughed, and said “Most of our towns begin with those letters.”  I pointed to the name, and he nodded and pointed us through.  Whew!

The train was waiting at the station, so we chose a nice comfortable spot with 4 seats and a table in the middle, and enjoyed the pretty lakes and mountains out our windows.  We stood out quite a bit as Americans, for traveling off season on a weekday with children.  Many locals watched us, and it was a bit uncomfortable, so we just smiled at them. We switched trains, and had just a short ride into Llandudno itself.  Out the window, we could see Conwy Castle in the distance, one of the main reasons for our visit. 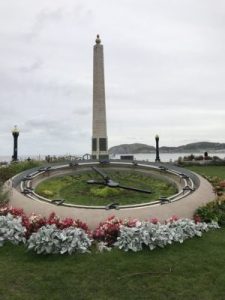 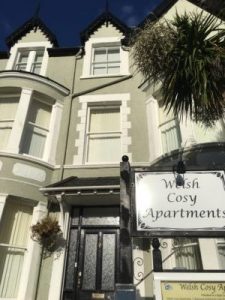 We had time to spare before check in, so we chose to make the walk towards our  apartment.  There were many, many second hand stores, beauty supply shops, clothing stores, and lovely old buildings with detailed architecture curling up the sides of the (mostly) three story buildings.  It became evident that Llandudno was quite the resort town (in the summer season), and restaurants seemed to make up every corner and every third storefront.  I’m not sure how they all stayed in business.  I was most surprised to see palm trees in people’s front yards!

The people spoke English, but I still had some trouble understanding them.  For instance, they called pitchers of water “jugs” and when we ordered a scoop of ice cream, she replied, “in a tub?

An “Englishman” sat down next to me one day in a cafe and proceeded to rattle on and on about how he was visiting from a town in England, and I only understood a fourth of what was coming out of his mouth, his accent so thick.  When I replied in my “American” accent, he looked so shocked, and said “You’re from America?!”   If all the people in England speak like him, we are in trouble.

Our apartment was just a short three block walk to the waterfront.  We watched the water crash over the rocky shoreline, and then rattle back over the rocks, such a soothing sound.  The surrounding mountains were beautiful. 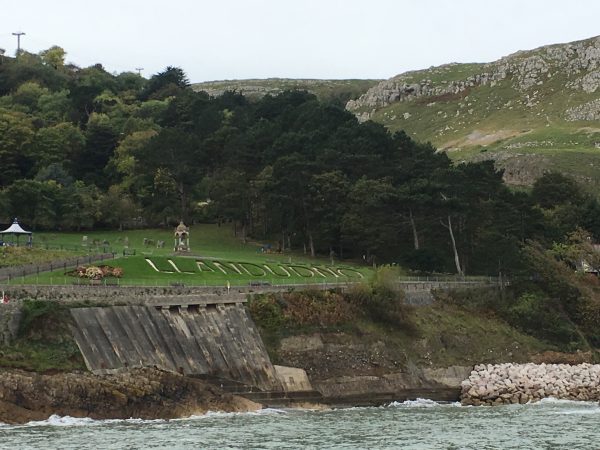 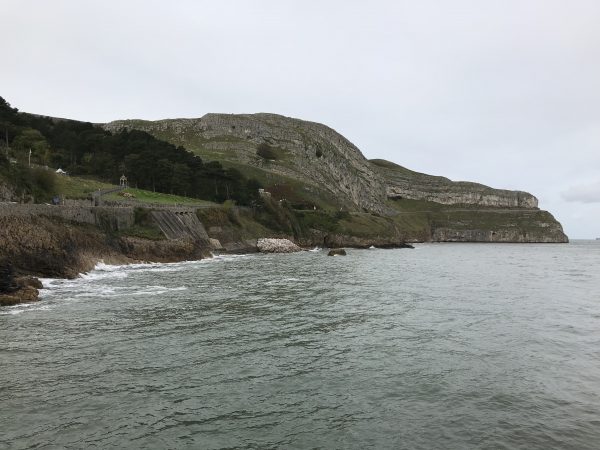 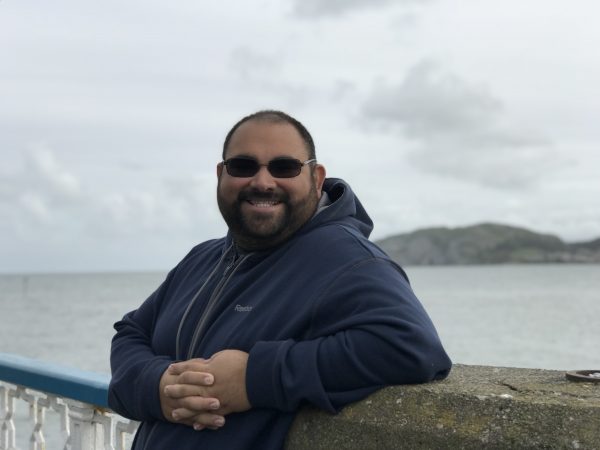 We took a walk to the pier, which had an arcade and little shops, most of which were closed for the season.  It was a serene stroll.  To my husband’s great delight, there was a Zoltar Machine, which brought back fond memories of his childhood.  We even let Zoltar give fortunes to our boys, who were seemingly unimpressed, but left us amused. 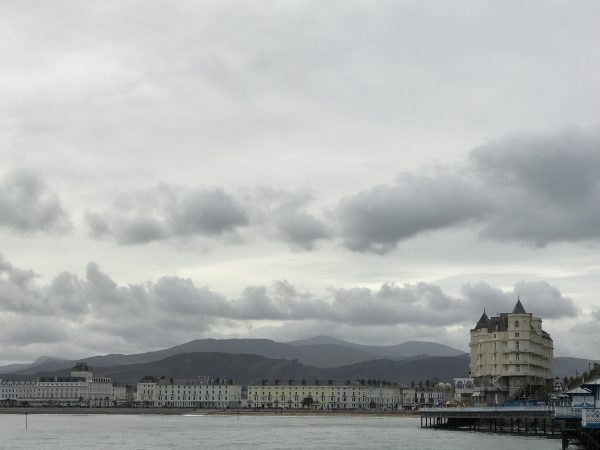 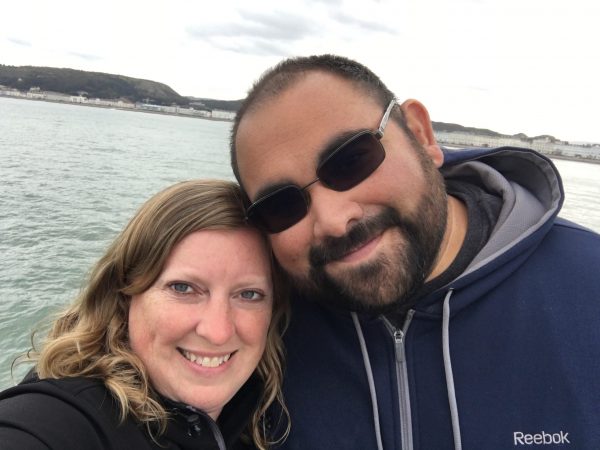 The pier overlooked the Great Orme, a limestone cliff.  Although our primary reason for staying in Llandudno was its proximity to Conwy Castle and Snowdonia National Park, we were pleasantly surprised to find the Great Orme Tramway, right in the center of this seaside town.  In fact, it would be one of my favorite experiences during the trip, perhaps because it was an impromptu visit to a beautiful place that we stumbled upon, rather something I had researched ahead of time. 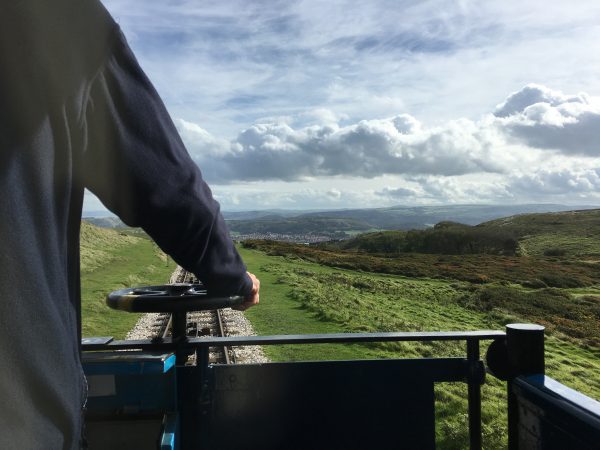 The tramway began one block from our apartment, and initially followed along the steep city streets up the miniature mountain.  I couldn’t help but wonder how well the brakes functioned as we slowly climbed in a self contained tram built upon a single track.  The views were a wonderful distraction, and we watched behind us as the town dwindled and the mountains and water view far, far below left us awe-struck.  It was a 10 minute ride to the Halfway Station, where we had to exit the tram, and get on a second tram for the final ascent.

At the top, it seemed 10 degrees colder and was wildly windy.  There was a Visitor Center, mini golf, and a Copper Mine. 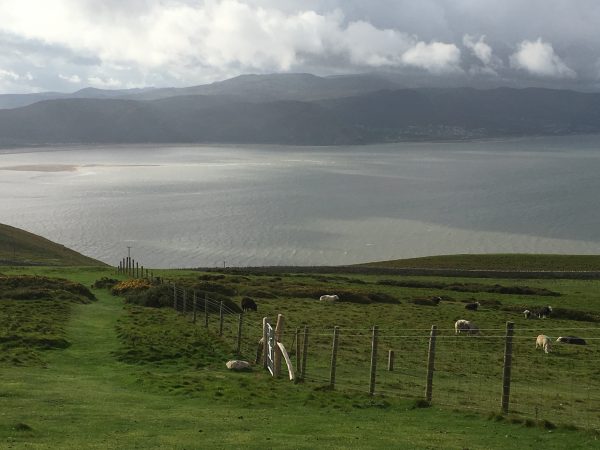 As we stepped off the tram and wandered up the green fields of the peninsula, there sat heart stopping views of the Atlantic Ocean all around us, and picturesque visions of sheep scattered over the green field. 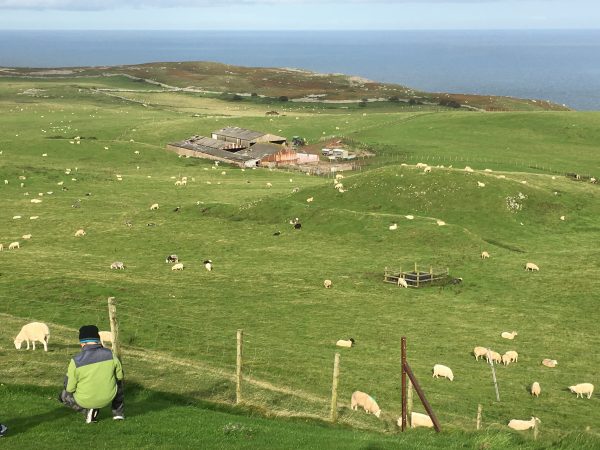 I could have sat up there all day, but alas, after a short stop at the playground and some imaginary Light Saber battles on the hillside, the kids were over it, and it was quite chilly.  Check out the video below to see a time lapse of the ride down the tramway – it’s really cool!

The remaining days in Llandudno were spent doing a little recuperating, essential for our sanity when we do extended trips.  The boys got haircuts at a Turkish Barber, we had long conversations as their observations led to discussions of history and politics, we caught up on some work, and had some home cooked meals.   The kids also watched some videos on YouTube about William Shakespeare, because after Wales, we would be heading to Stratford-Upon-Avon, Shakespeare’s home.

Due to the rainy forecast, we did not make it to Snowdonia National Park, but we did visit Conwy Castle, the incredible remains of a Medieval Castle, which I’ll write about next time. 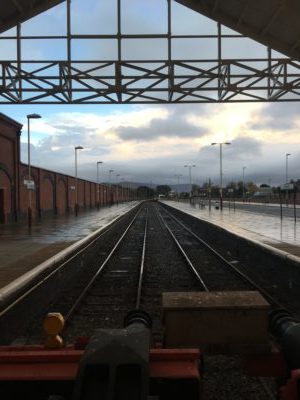