Off to the Land of Fire & Ice: Iceland

We had been talking about visiting the U.K. for about 10 years, but Iceland wasn’t really on my radar.  However, as our itinerary took shape, I realized that starting at the furthest point north, at the beginning of Autumn, was going to be necessary.  That meant Edinburgh, Scotland would be our first stop.

As I browsed airfare, I kept noticing that the cheapest way to get to Edinburgh was by having a layover in Reykjavik, Iceland.  While this idea lingered in my head, I began to do brief searches about Iceland, and before long, my bargain airfare with a layover in Iceland, became a direct flight to Iceland instead.  Four days would have been perfect for Iceland, but I gladly worked with two!

We flew directly from Los Angeles to Iceland, via Wow Airlines.  They are a discount carrier, but I was happy enough with their service.  We did have to pay for carry-on bags, and we managed to travel with only 3 carry-on backpacks and my youngest son’s backpack simply counted as a small “extra” bag.  I’m actually shocked we pulled this off! 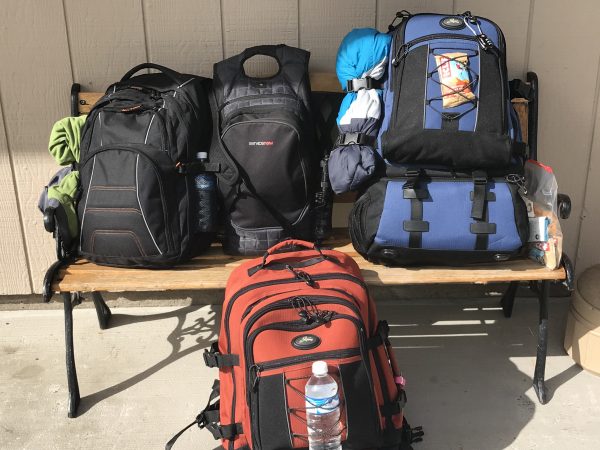 The flight was on a giant airbus, and the middle rows had exactly 4 seats, which worked well for us.  We left at 9:50pm, and touched ground around 6:20am, which turned out to be 1:20pm Iceland time.  Sleeping on a plane overnight was, well, typical sleeping on a plane.  The sun rose at 3 am, which was a pity for those of us sitting near passengers that left their window shade open, fell asleep, and were oblivious to the blast of light that kept some of us from going back to sleep.  Although the boys complained that they didn’t sleep well, I disagree.  They certainly weren’t ready for bed in the middle of the “afternoon” like we were!

We arrived at the airport, walked down the steps of the plane into the wild wind, and were promptly put into a shuttle bus to take us to the airport entrance.  The airport wasn’t too large, and we breezed through Customs.  From the airport there was a shuttle bus that brought us directly to the car rental lots nearby.

I highly, highly recommend renting a car on a visit to Iceland!  Driving is a breeze, there is little traffic, and it gives you lots of flexibility!  We used Enterprise, and made sure to request an automatic car.  Another handy thing my husband did was to video the entire “walk around” before we drove off, while the agent jotted down existing dents and scratches (something that would save us later, when a different agent tried to charge us for damage.  We said “no way”, showed the video of the pre-existing scratches, and that settled it!  Phew!)

The agent mentioned two things to keep in mind when driving in Iceland – 1) no turn on red at stoplights, and 2) headlights always need to be on.  Also, as I had researched, the wind can very commonly tear the car door right off, so we had to use caution when opening and closing the doors.  The wind gusts in Iceland are no exaggeration! 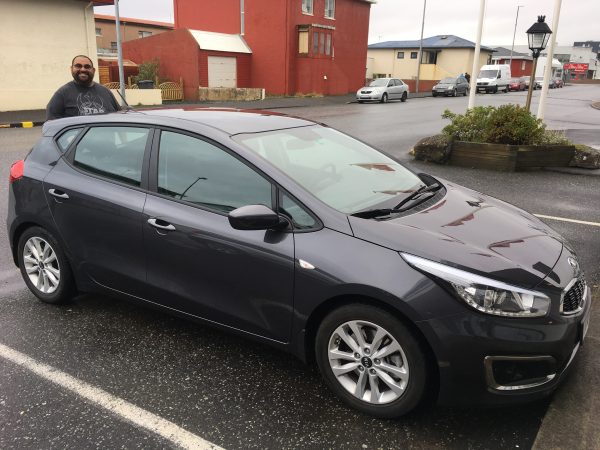 We were going to pay for the navigation system, but instead the Enterprise agent recommended a handy wifi device that plugged into the cigarette lighter, and simply allowed us to use google GPS on our phone.  It was something like $14 a day, and you could connect unlimited devices while in the car.  This made for some happy kids while on a long drive and it worked like a charm.

Instead of staying in the capital and largest city, Reykjavik, which was 45 minutes from the airport, we chose to stay in the town where the airport was located, Keflavik.  Because we had the car, we didn’t need to book tours that only started and ended in Reykjavik, and we also didn’t have to drive 45 minutes to the airport on the day of our departure, at 4 am in the morning!  Keflavik suited our needs just fine for a short visit. 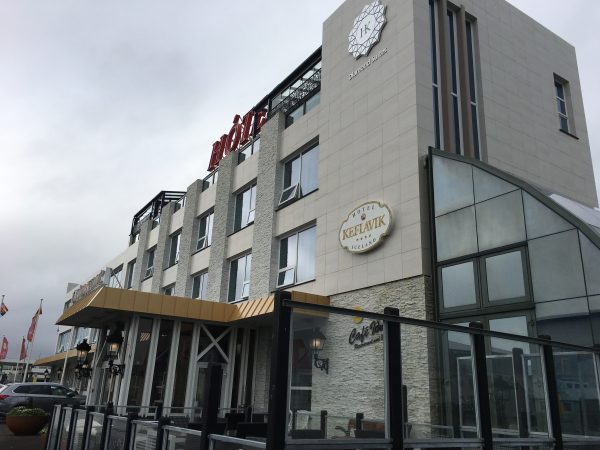 Once we checked into the hotel, we walked to the end of the street and had lunch at a little cafe.  Wow – did I mention how expensive Iceland is?  Four burgers and fries cost the equivalent of $60 USD!  That didn’t even include drinks – we only drank tap water.  Good thing we didn’t stay long! 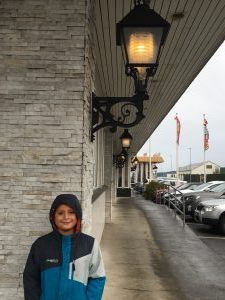 Then we hopped in the car, and headed straight for the Blue Lagoon.  My plan was to see if we could at least go LOOK at it.  Then we could decide if it was worth a one hour, $100+ swim.  Yep, that’s for real!  Check it out for yourself.   I kept my fingers crossed that we could see it at the very least. 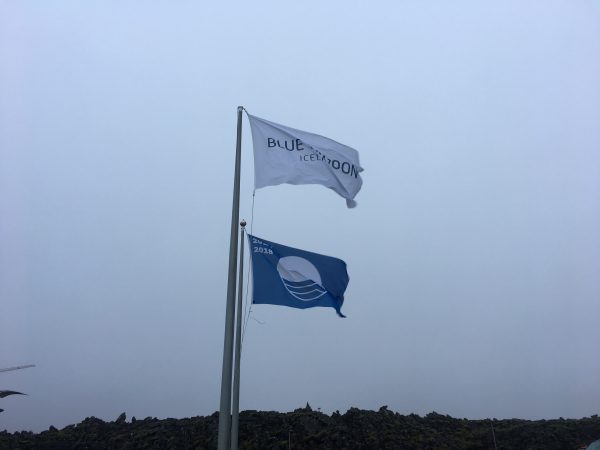 The drive was quick and easy.  As we drove through the strange dark lava rock covered in green moss, we felt as if we were on another planet.  Suddenly, below the clouds, the steam in the distance signaled our arrival.  We could smell the sulfur far before we reached the parking lot.  The lot was absolutely packed with cars and buses, which didn’t surprise me too much, as I knew that people needed to book tickets well in advance to swim in the Blue Lagoon. 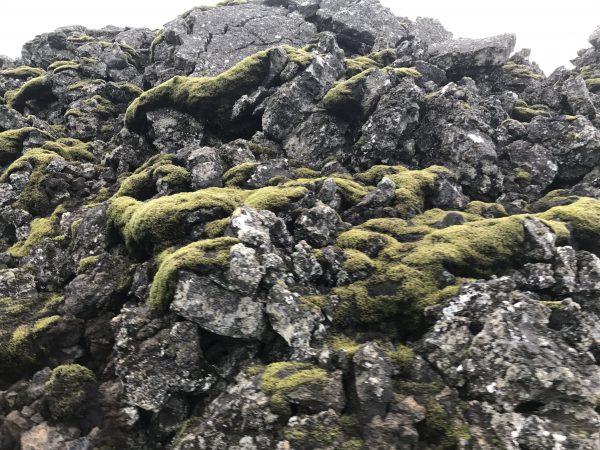 We parked in the lot, and followed the pathway to the entrance, wondering if we’d see anything but the building.  Luckily for us, immediately to the left side of the entrance, was access to the Lagoon.  There was a sign that even displayed the walking trails around it.  Great news for those of us content just to view it!  (I researched online if there was a place to simply view the Lagoon, and couldn’t find good information anywhere.  So if you were wondering, you’re welcome. ) 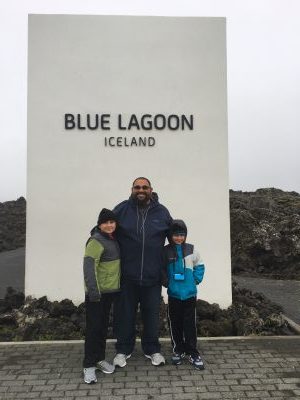 I was surprised to learn that the Blue Lagoon was man made.  The Lagoon was formed from the nearby Geothermal plant, the only one of its kind, which creates power and hot water for nearby communities.  The Lagoon is the run-off of water that isn’t needed for this heating process.  However, the water is clean, and is rich in minerals like sulfur and silica.  Many people swim in these waters to improve their skin, and it’s especially beneficial for those suffering from skin diseases.  The water averages 98 – 102 degrees Fahrenheit.  So, is it naturally made?  No.  Is it still a beautiful site?  YES! 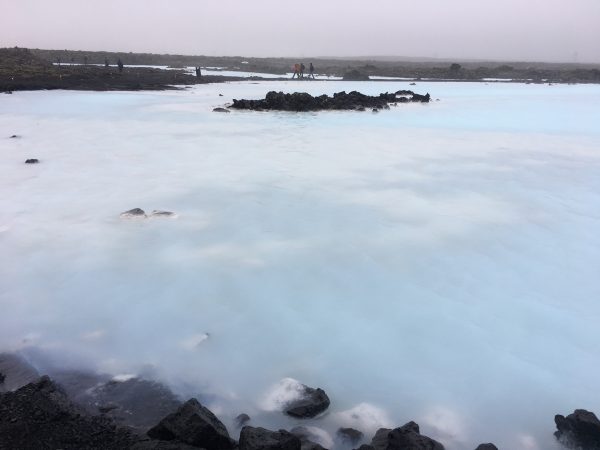 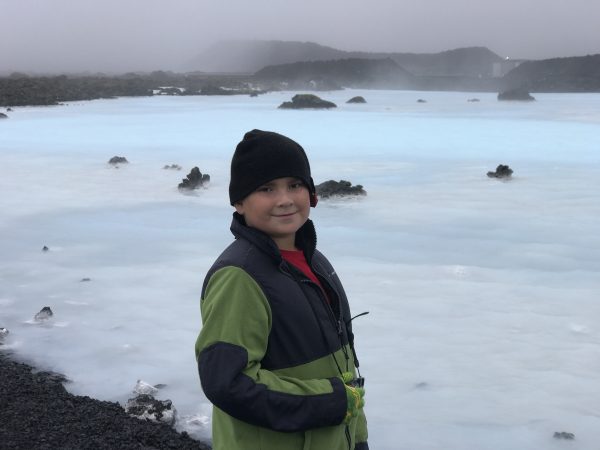 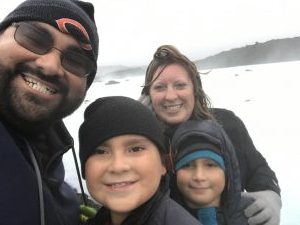 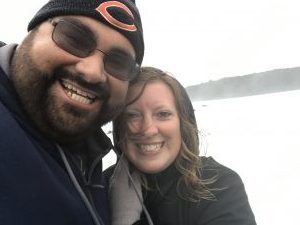 After all that excitement, it seemed like it must be midnight.  But, alas, it was not.  So we drove the nearby Reykjanes Peninsula, which I’d heard had some geothermal activity, a lighthouse, and some great views of wildly crashing waves.  But, quite honestly, the weather was drab and rainy, and we were just too tired to bother getting out to face the rain and wind.  So, we simply drove around it.  It was desolate.  The landscape was more lava rocks with green moss, like being on another planet.

We decided that the jet lag was too much, and called it a night (or afternoon?).  My body was totally confused.  My hubby and I fell asleep quite early, but the boys were still on Pacific time, and didn’t go to bed until late.  (Hence the reason I realized they had slept perfectly on the overnight flight), despite their claims.  We, however, were awake at 3 am Iceland time.  Just when we decided we’d get up and get going early, we somehow fell back asleep, and none of us awoke until close to 10 am.  So much for our early start…

blue lagoonkeflavikland of fire and icereykjanes peninsula
5 Reasons We Chose RV Living…Again
My Time in Iceland
Subscribe Below and Receive My Favorite Inspirational Quotes.