A few days after arriving in Playa Del Carmen, we had a reunion with friends that we had met in San Diego at the RV Rally in January of 2016.  Their family joined us for a long weekend in Playa Del Carmen, before we would reunite again in Merida the following week for the Worldschooler’s Rally. 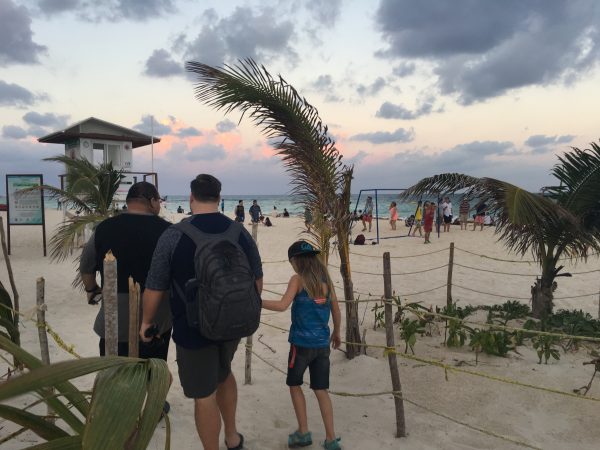 The men had to work on Friday, so the rest of us spent a very rough day on the rooftop deck, hanging at the pool, and allowing the kids to spend quality time playing Minecraft together.  That evening we went to Parque Los Fundadores,  where we watched the Papantla Dancers that I had mentioned in my last blog. 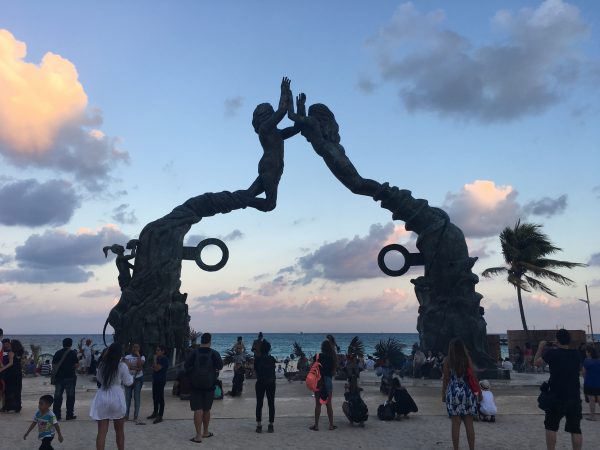 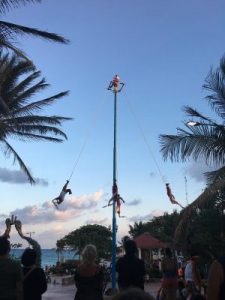 Then, after a very brief dip in the ocean, we had dinner at the Wah Wah Beach Bar.  We sat at a table right on the sand, and ate pizza while looking out at the ocean and watching the palm trees sway in the wind.  The kids entertained us with songs from the movie Moana. 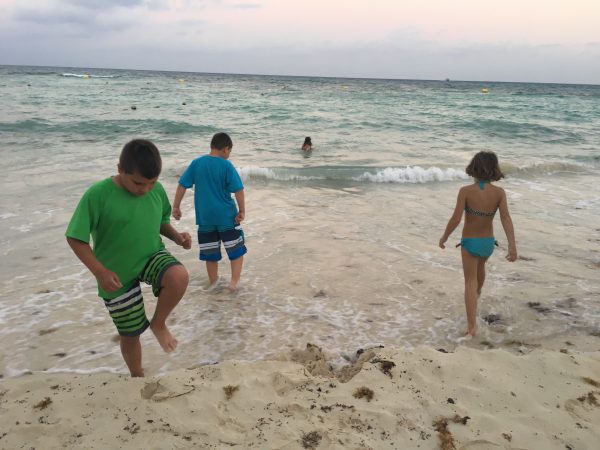 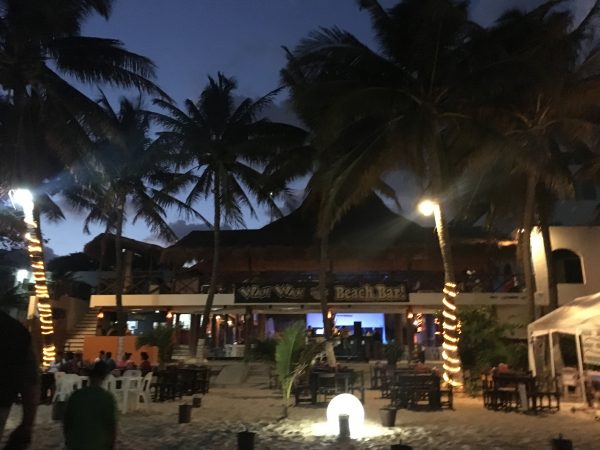 Instead of hailing a taxi to get back to our hotels, we walked a little into town to find the colectivos, which are passenger vans that transport you back and forth along a main highway, stopping only along the road when requested. Each van has a neighborhood name written on the front windshield, so we relied on the men to use their Spanish skills to find out which van would get us closest to home.  The inside of the colectivos have benches along the outer edges, and handles for those who needed to stand in the middle if no seats are available.  The colectivo ride was only $6mx per person, which equates to about 0.25 cents each.  It is cheaper than a cab, but you have to do a little more walking to get to your destination. 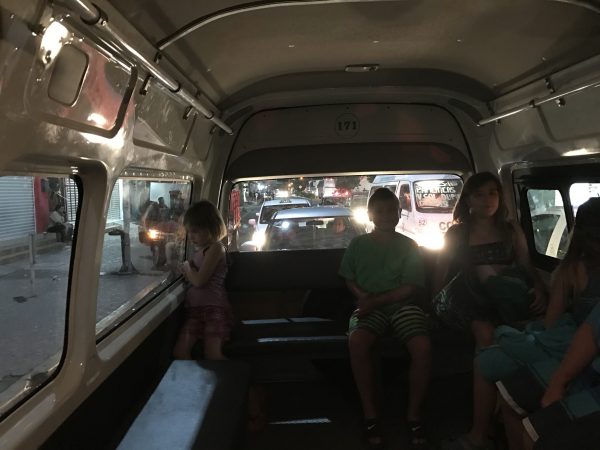 Bicycle rickshaws are quite common in the area and probably the only mode of transportation we did not try out on this trip.  Pictured below, some men waiting to give people a lift around town or to the beach.

The next day we took a colectivo ride to Xpu-Ha (X is pronounced SH, so shpoo-ha), where another Worldschooling family had invited us to join them at their campground right on the beach.  Since the colectivo dropped us at the side of the highway, we took turns getting a ride down the long road to the campground in that little red motocar pictured below.  It belongs to the family that we were joining, who purchased it in Mexico as their family’s means of transportation around town. 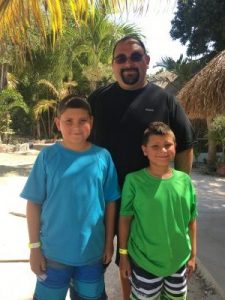 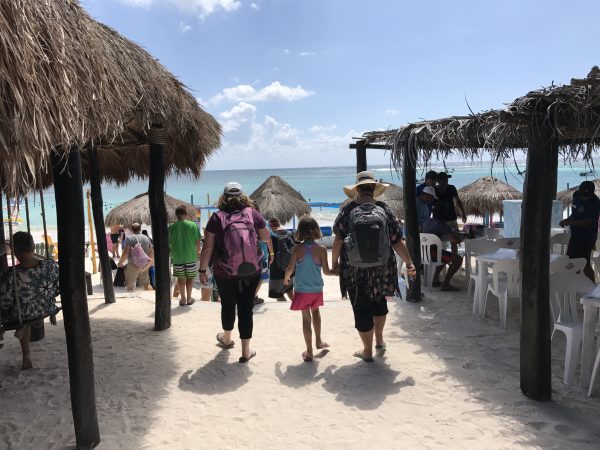 A strong wind had blown through the area the prior day, and brought in tons of seaweed.  So the normally clean and beautiful sand was a little ugly.  Men were raking it up and removing it by the truck-ful, mostly in front of the Beach Clubs. 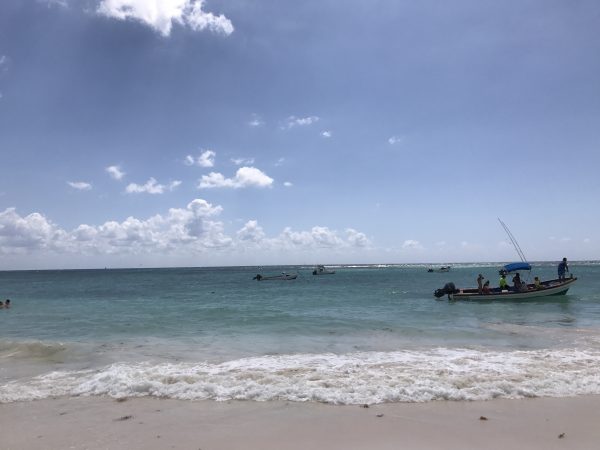 The water was shallow for quite a distance, but we were told that if you swam out to where the water turned a different shade of turquoise, there was a drop off with great snorkeling.  Many of our group swam out to snorkel.  Jacob did some snorkeling a little closer to shore and still got to see some fish. 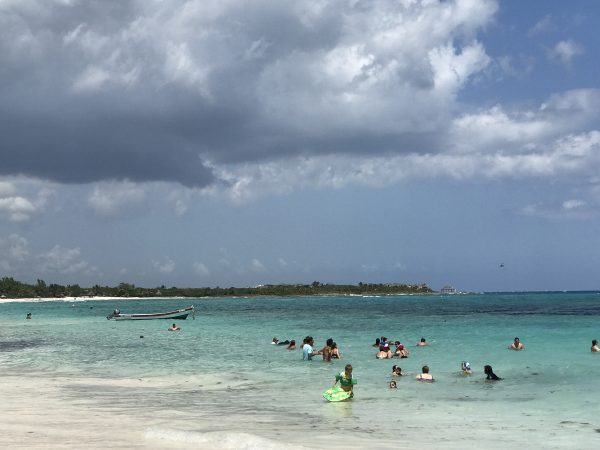 We were so busy having such a great time chatting with our friends, that I’m afraid we didn’t cover up as well as we should’ve with sunscreen, and our entire group was pretty fried by that afternoon.  That was where the lip swelling sunburn came from that I mentioned last week. 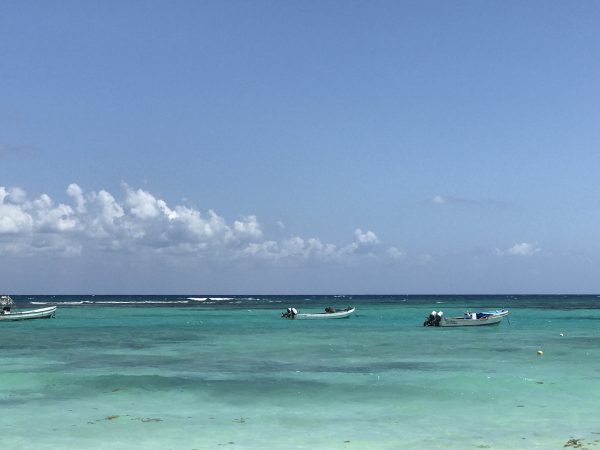 We spent the evening back at the campground.  The guys went out to fetch us dinner, and came back with quite a spread that fed each family for about $6-$10USD.  They had cleaned out the food stand completely.  We sat outside and enjoyed the slightly cooler temperatures that the evening brought.  Even though we left very late, the kids were still trying to convince us exhausted parents that we should still have more playtime.  That was quickly shot down, because we had another full adventure ahead of us the following day…