The Highlands, Glencoe, and the Hunt for Nessie

While we were based in Edinburgh, one of the side trips that we wanted to take was to see the famous Loch Ness in Inverness.  So instead of renting a car and attempting to drive on the opposite side of the road, we booked the longest day tour I could find, which included Loch Ness, the Highlands and Glencoe.

We booked with Highland Experience Tours, which I’d highly recommend.  We rode in a 32 passenger bus with nice large windows.  We arrived in central Edinburgh at 7:30 am to leave by 8, as it was a 12 hour tour.  We were the only family with children, and we gladly let them bring their “tech” along to keep entertained, as any kids asked to willingly participate in a 12 hour tour ought to be kept happy!

Our tour guide, James, wore a kilt, and spent the entire tour doing a great combination of talking, telling stories and history, and playing music, both traditional songs and modern artists.  This tour format was extremely well done, the best I’ve ever experienced.  The music added the perfect touch! 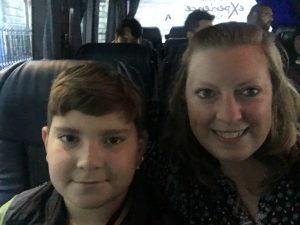 Early on our drive towards Inverness, we passed Lochleven (Lake Leven), which held a small island in the center of it.  It was here, at Lochleven Castle, where Mary Queen Scots was held captive by her cousin Queen Elizabeth for 19 years, who worried that her cousin may try to take over the English crown.

We stopped about 45 minutes into our drive into the quaint town of Pitlochry, a Victorian style village, (which just happened to have won the Spirit of Scotland Award.)  It was very quaint!  We had a half an hour to take a break and grab some snacks.  Kyle tried the “white” ice cream, which was not really vanilla, but he liked it well enough. 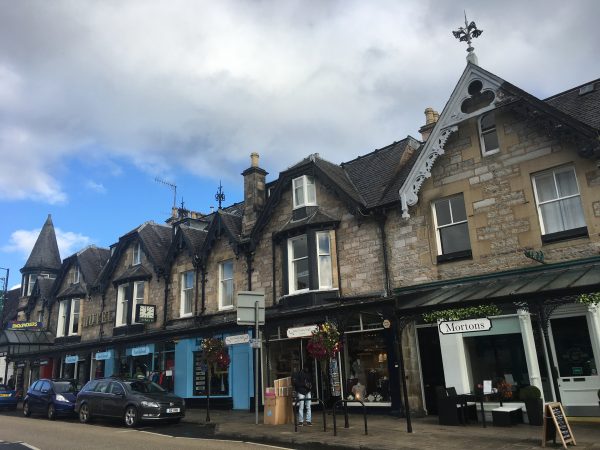 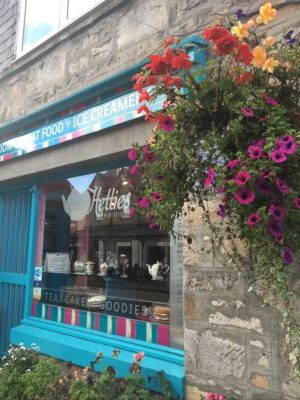 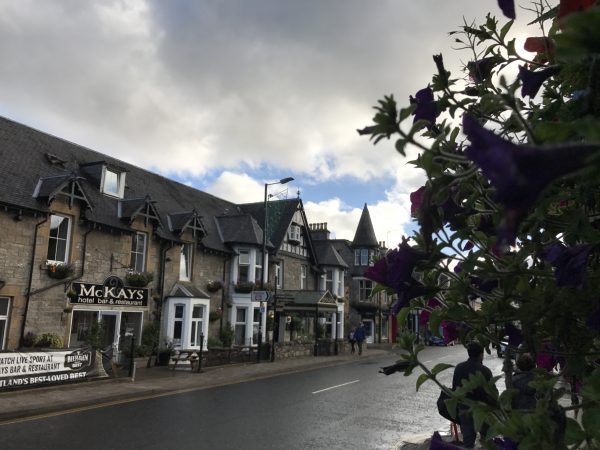 We then drove through Cairngorms National Park, one of two national parks in Scotland, on our way towards Loch Ness.   As we drove, the driver entertained us with stories.  He told us of a famous man, born in Scotland, and later emigrated to the United States, becoming wealthy in the steel industry among other investments.  He pronounced his last name as “Car-NIGGY”, and after repeating the name several times, I finally realized he was referring to Andrew CARNEGIE! 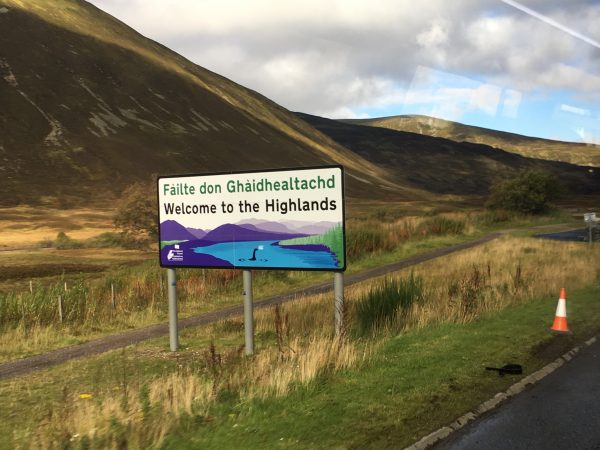 Houses in this part of Scotland were built atop remnants of volcanoes.  There are forest hens and grouse (allowed to be hunted only 2 weeks every year), still in the area.  Much of Scotland is farmland.  After our initial thrill of seeing fields full of sheep, we started to get used to seeing them all over the U.K.  There are actually more sheep in Scotland (7 million) than there are people (4 million.)

James told us that Scotland is also known for its whiskey.  The Scotland actually trademarked the word “whisky”, which is why it is spelled “whisky” in Scotland, and others who don’t have actual Scottish whisky, spell it with an e.  (However, on our Irish tour, the driver said that the Irish took the word whisky and added the letter “e” for “excellent” to differentiate theirs from Scotland.)  So, believe what you will! 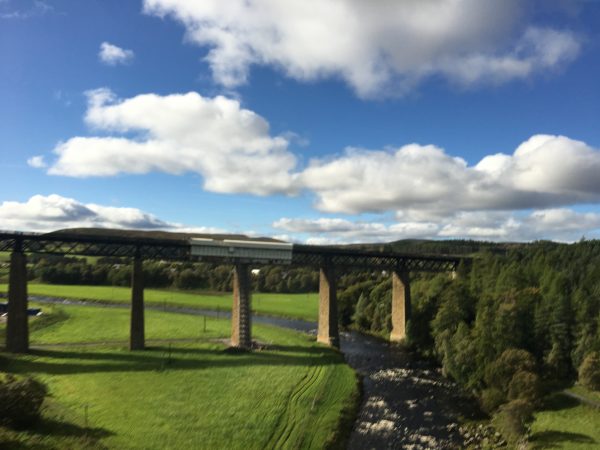 Scotland’s history is steeped in myths and legends.  Our guide also shared a story of their staunch belief in the sacredness of the land.  There was a man who bought some land in a small village in Scotland but wanted to move a large rock off the property.  The people of the village were horrified because they considered this rock a sacred stone. The townspeople were so steadfast in the belief, that they gathered together and brought the newcomer to court, to try their case and convince the judge that removing the sacred stone would cause bad luck for the town.  Alas, the town actually won the case and the new property owner was forced by court order to leave the stone untouched on his property. 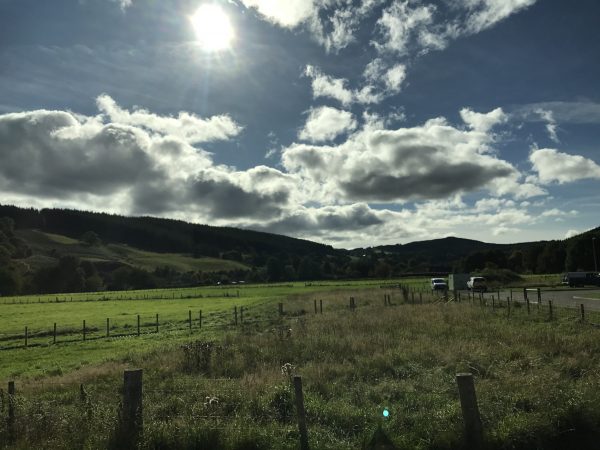 We drove through Inverness, the capital of the Highlands with its 80,000 inhabitants.  Inverness been voted the 5th most beautiful city in all of Britain.  The tour guide explained that because of its remote location, the University Students in Inverness do 80% of their work at home.  There are mobile cinemas, banks, and doctors that travel into and around Inverness about once a week to provide services to its citizens, due to its remote location.

The guide then told the story the execution of Lord Lovat, who was captured for being a Jacobite (leading a rebellion) and sent to the London Tower for his execution.  There was a crowd of people awaiting his execution, seated on scaffolding.  Suddenly, as they prepared to chop off his head, the scaffolding collapsed and 20 people who had been sitting on it were killed.  Apparently Lord Lovat found this so amusing that he began to laugh.  He was laughing and laughing, even as the ax came down to chop off his head.  Hence the expression, “laughing your head off”.  He was the last person to be beheaded at the London Tower.

Finally we arrived at the famous Loch Ness, where sightings of a Loch Ness monster were reported as far back as the 7th Century A.D.  Loch Ness is the second deepest lake in Scotland, at almost 800 feet.  Arriving on a bright, sunny day, there was certainly nothing threatening looking about it. 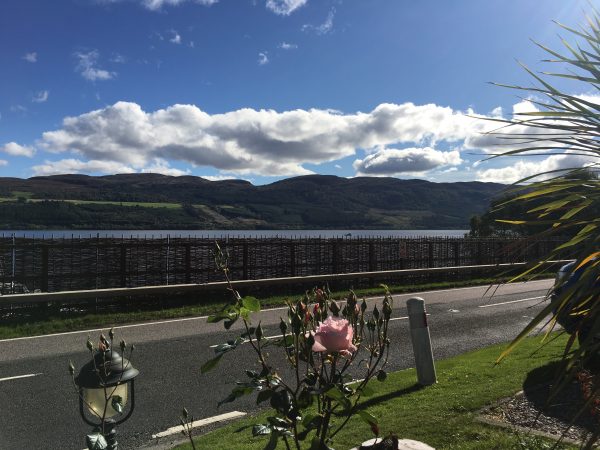 We opted to eat our lunch by the shore and keep a look-out for Nessie.  Apparently the kids weren’t too worried about it, because promptly after lunch, they couldn’t resist sticking their feet in the water and walking across the water on large boulders.  We even had some fun with a dinosaur toy we brought along, and took our own Nessie pictures. 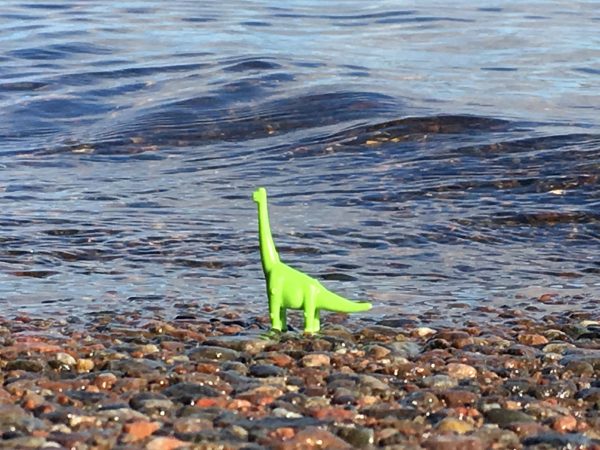 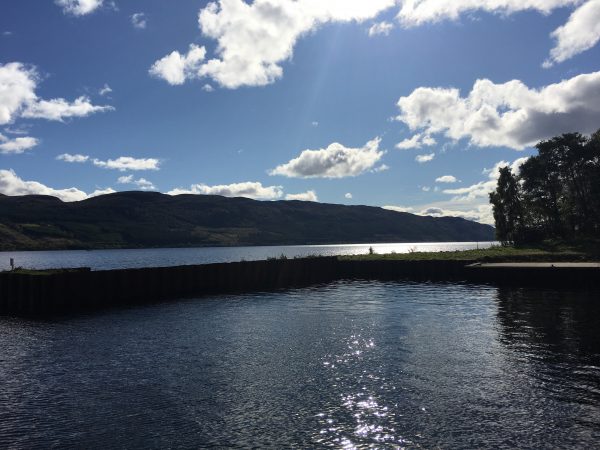 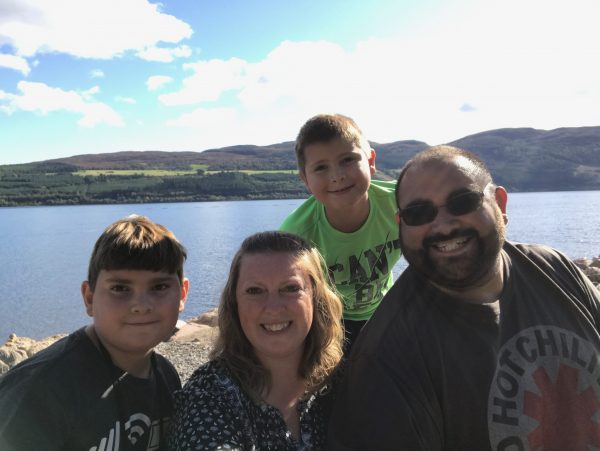 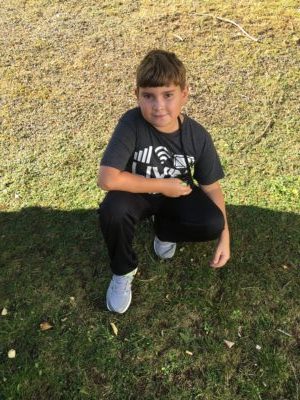 The next stretch of road was full of crazy twists and turns, and three of us even got slightly car “sick.” That confirmed my decision NOT to rent a car was a good one.

We made our way through Fort Williams to Glencoe, with its green and yellow mountains.  There was very little brush on the mountains.  They were filming a movie where we stopped to take in the views.  Many waterfalls were rushing down the mountains as we drove through the area.  We passed a road which led to the area where filming of James Bond took place, and where part of the third Harry Potter was filmed. 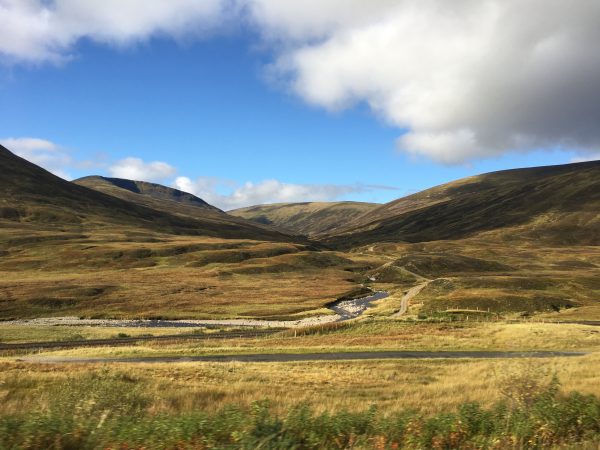 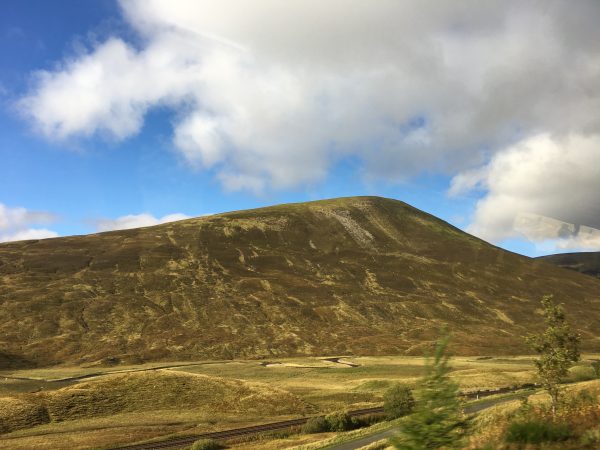 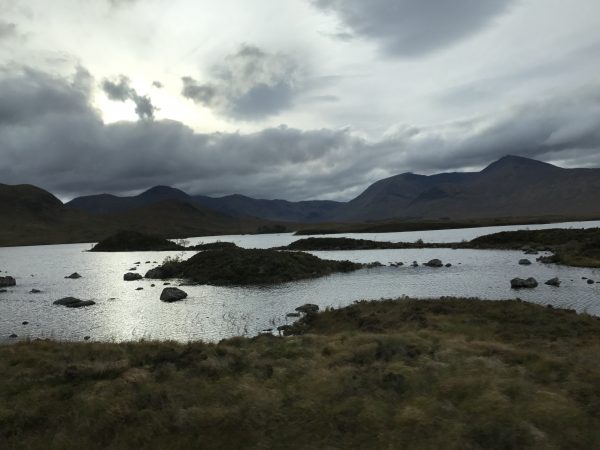 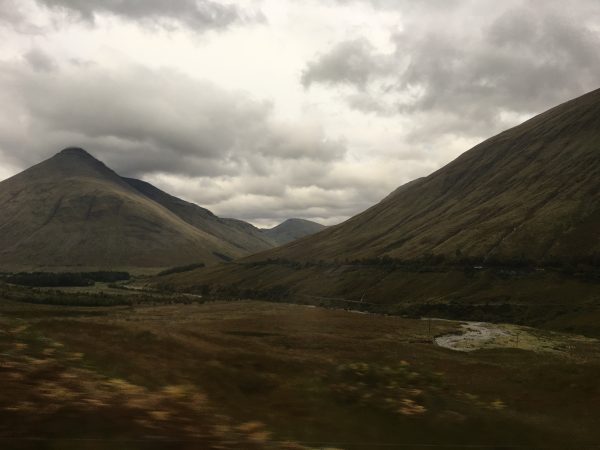 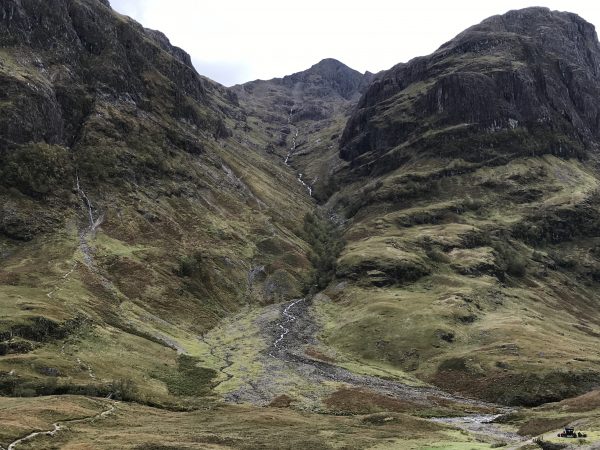 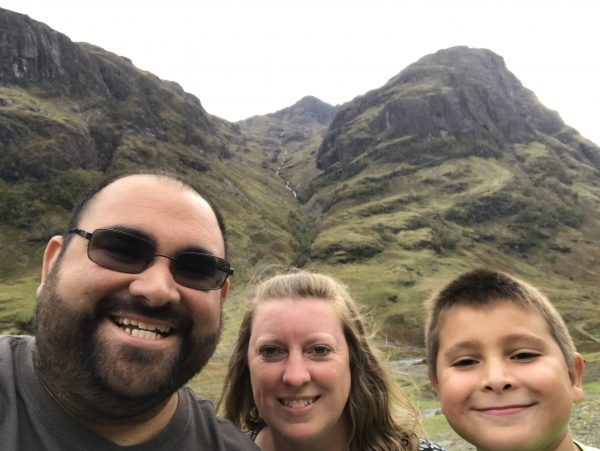 Next we drove through the crowded town of Fort Williams on the way to Ben Nevis, the tallest peak in Scotland, which stands about 4K feet.  Many people visit the area to climb Ben Nevis, and a popular tour for climbers is to complete the National Three Peaks Challenge, where participants travel to and climb 3 peaks in the U.K., all within ONE day.  These three peaks are Ben Nevis in Scotland, Snowdon in Wales, and Scafell Pike in England. 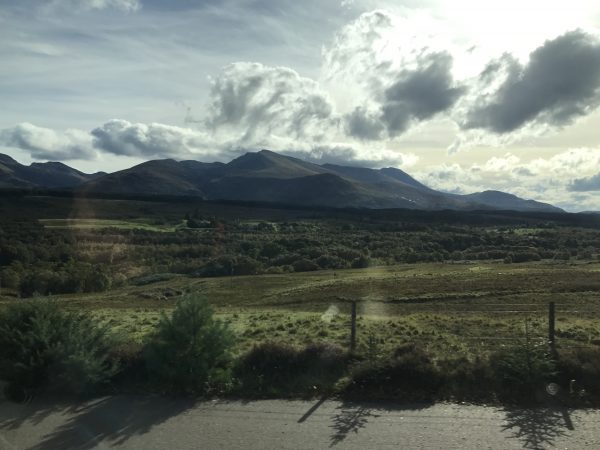 The tour guide insisted that we were a lucky group that day, because Ben Nevis is often shrouded by cloud cover, and is only visible about every 10 days.  We had nice clear views. 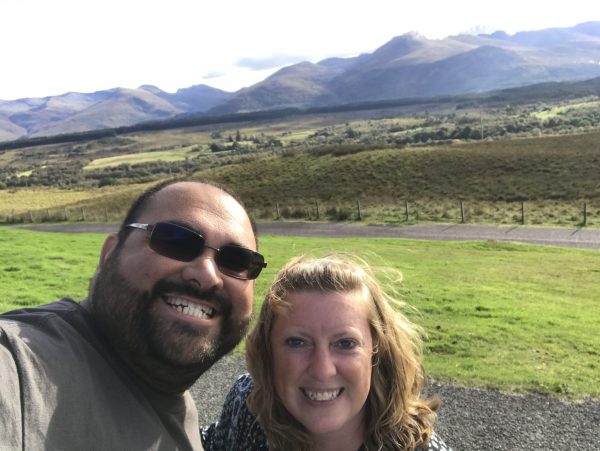 It was a loooong ride back to Edinburgh from here.  Our Guide broke up the trip with an extra stop at Trossachs Woollen Mill, where we were treated to fields of sheep as well as Highland cows, which we were able to feed carrots. 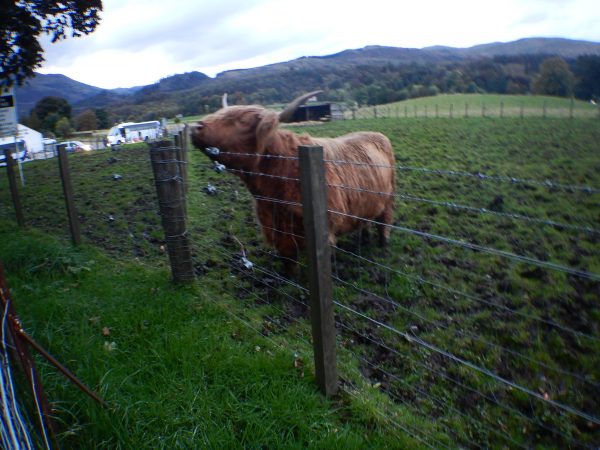 All in all, it was a jam-packed tour that took us all over Scotland, and Highland Tours did a fantastic job.  Although was a LOT of ground to cover, and I would recommend to split up those attractions into a couple days if you’ve got the time!